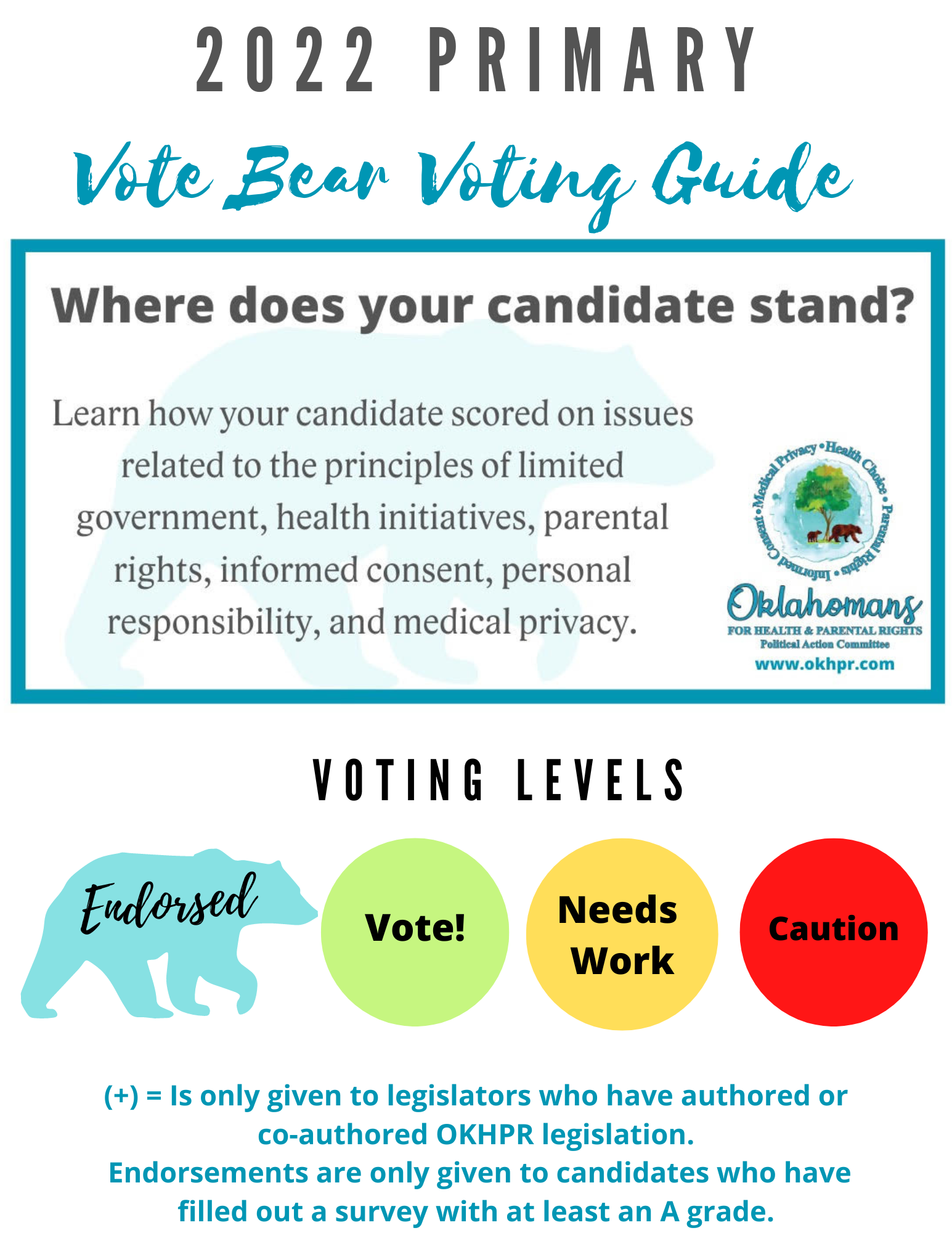 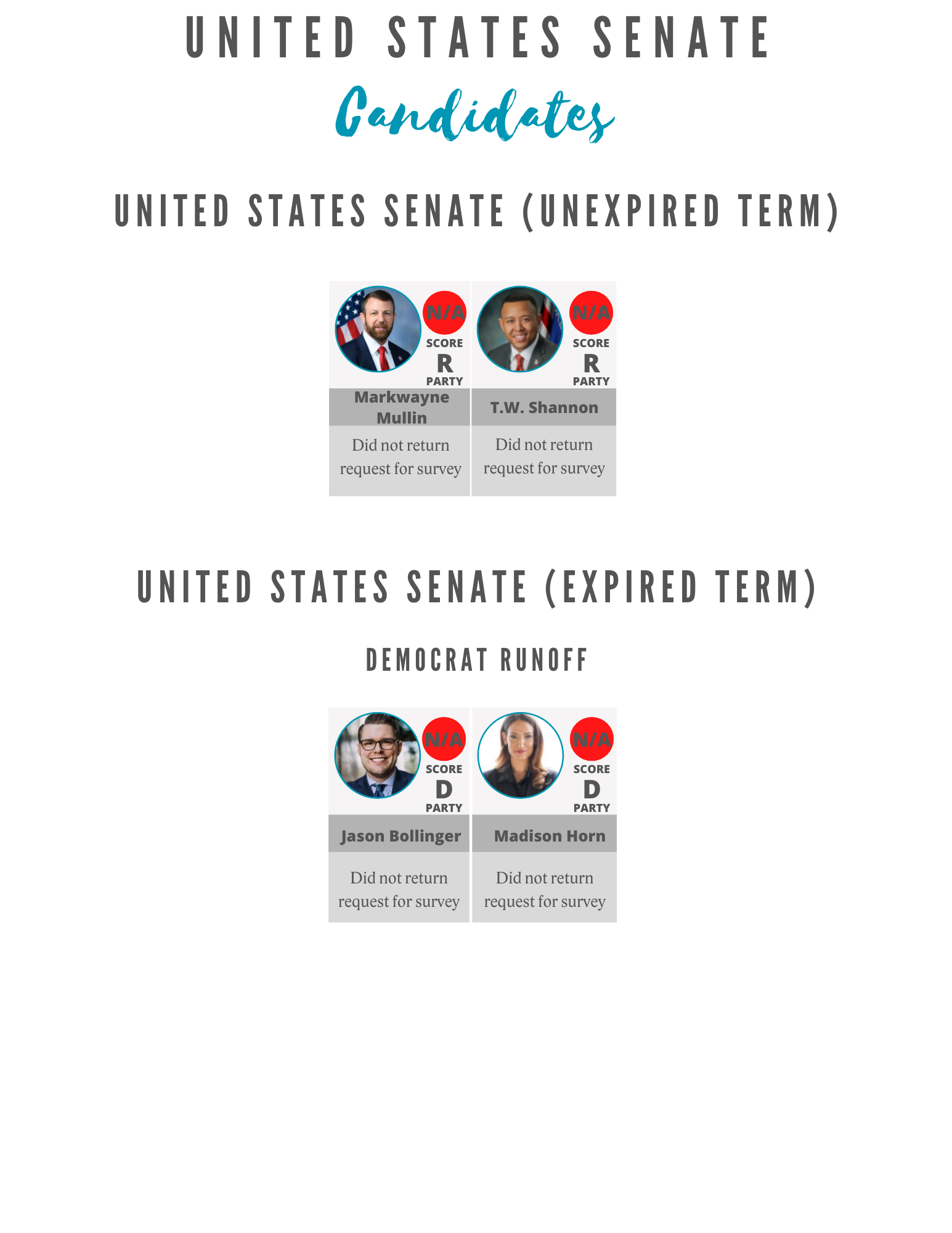 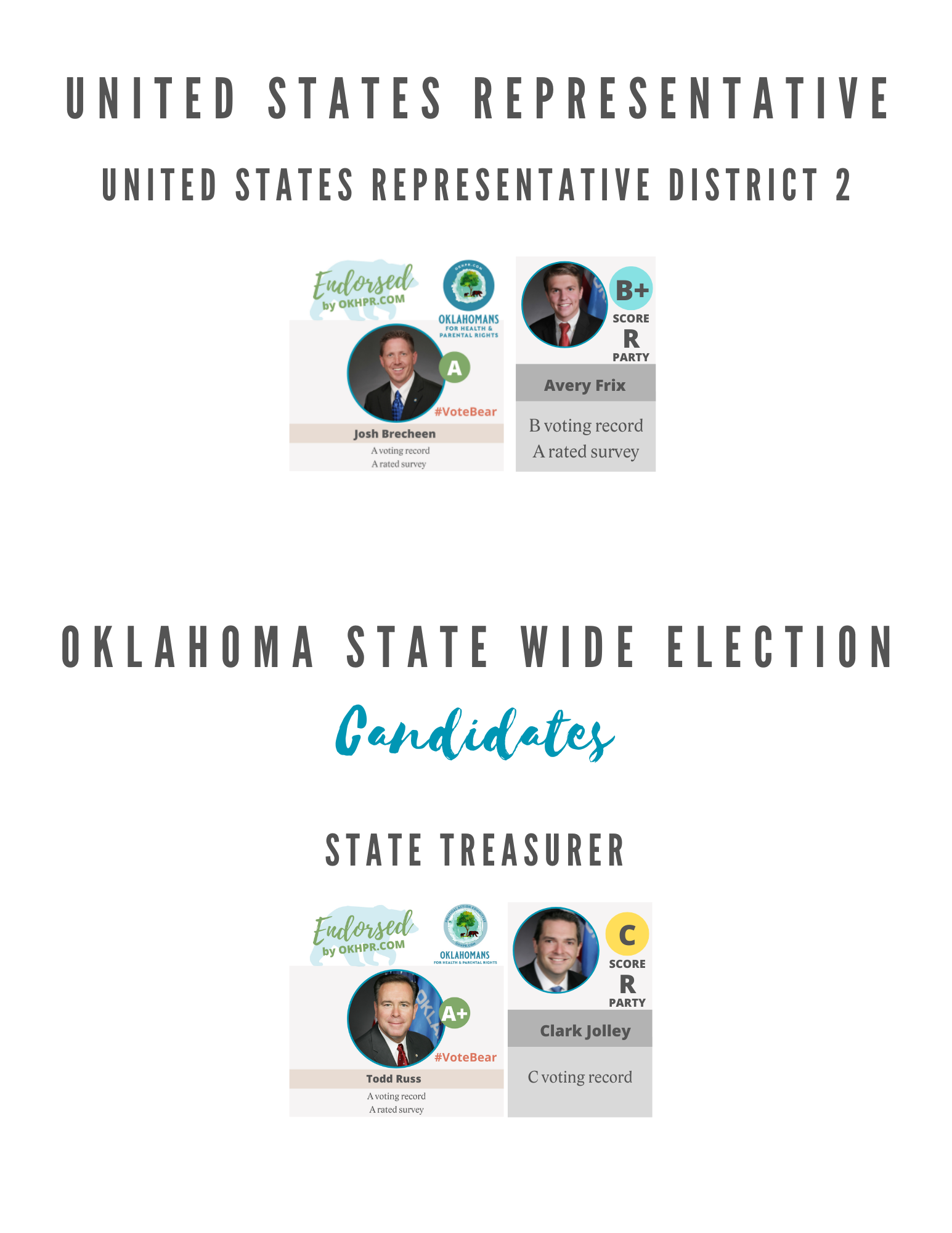 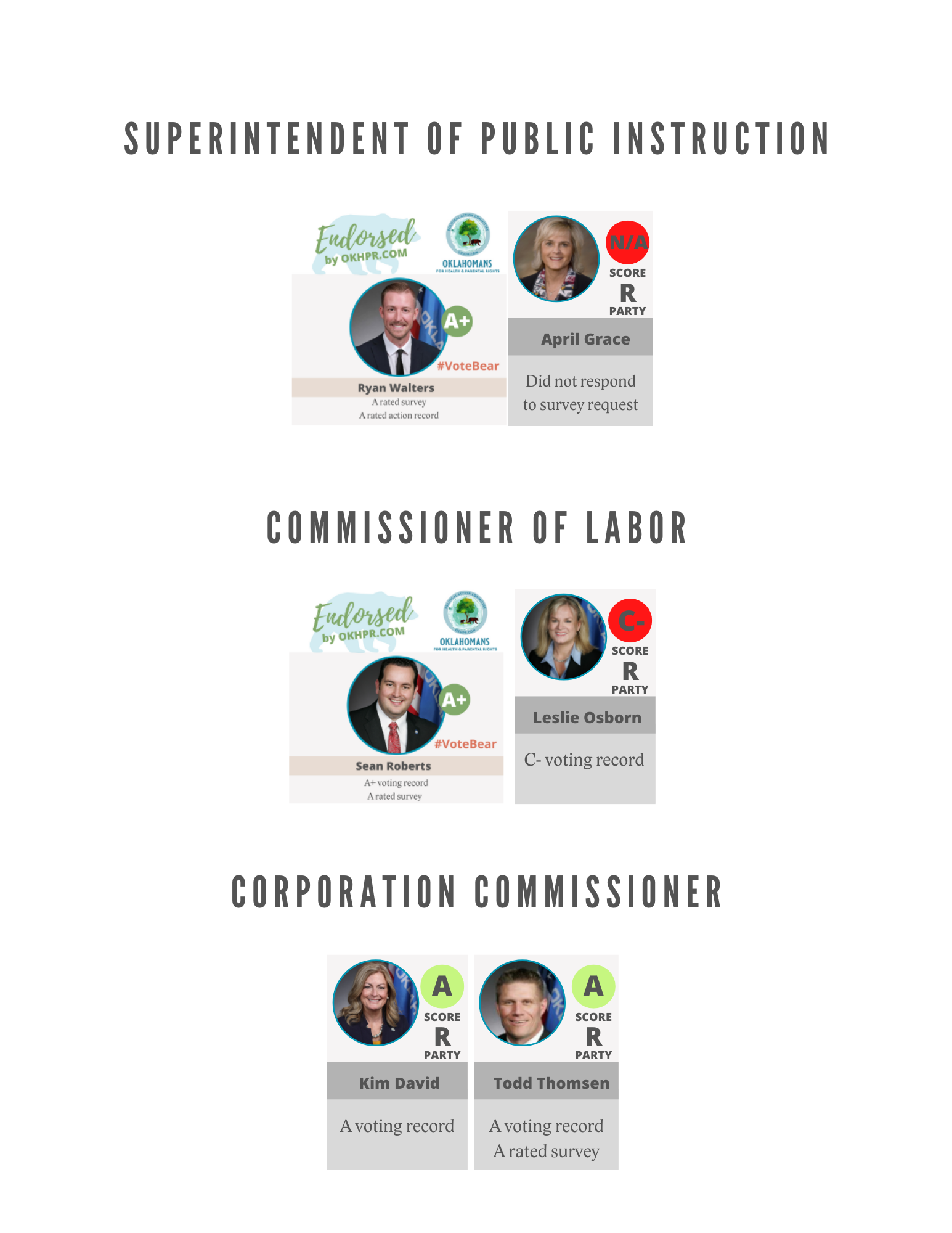 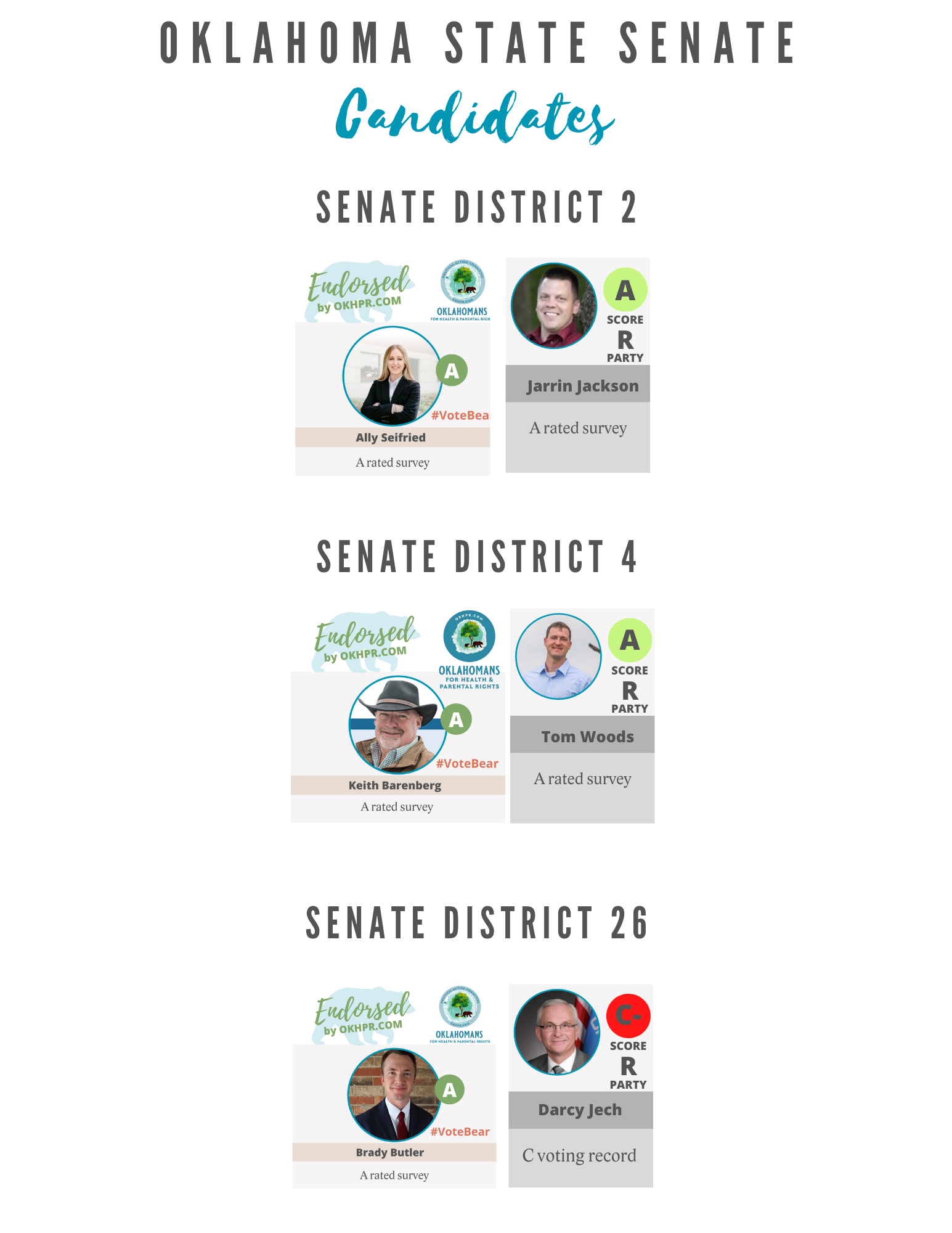 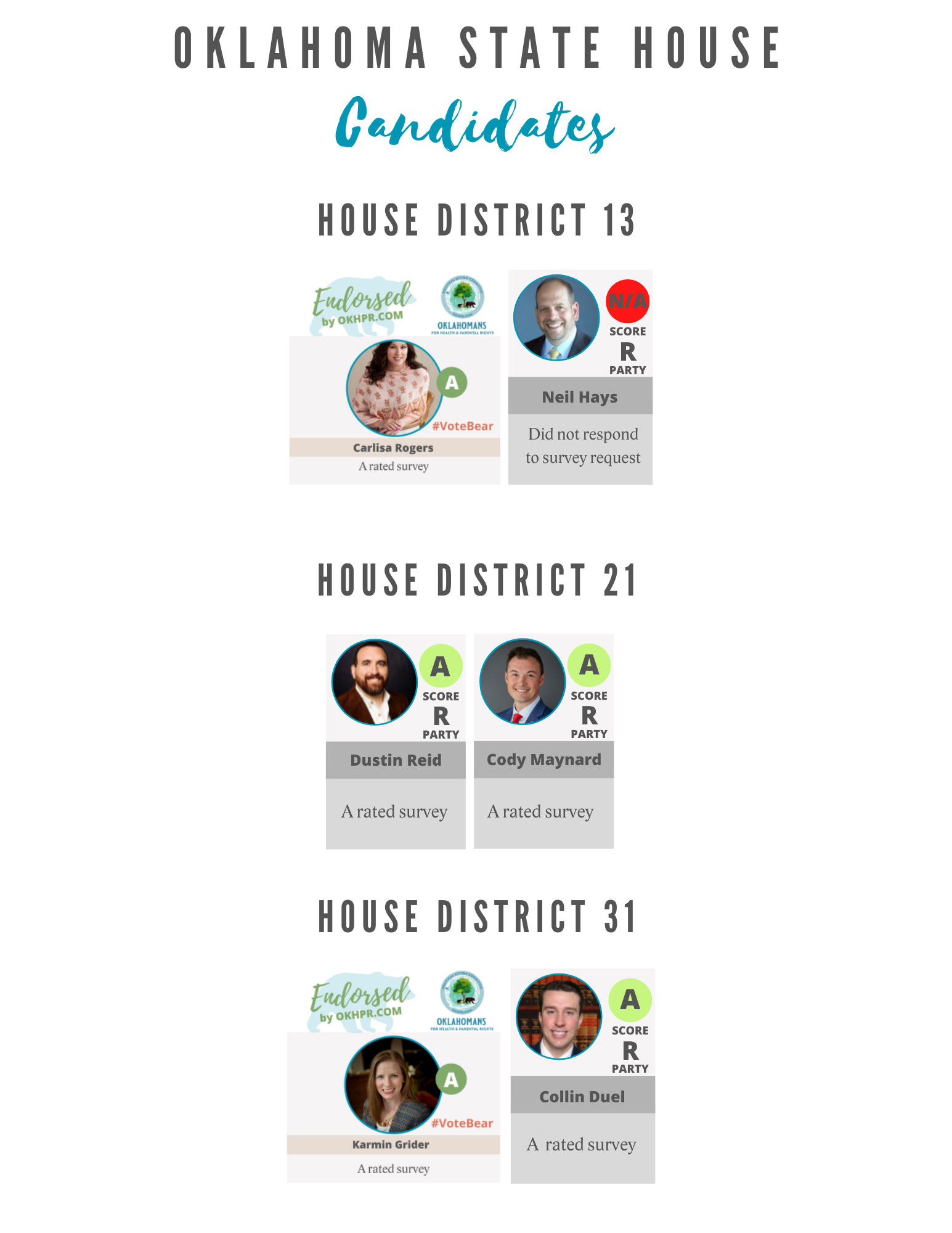 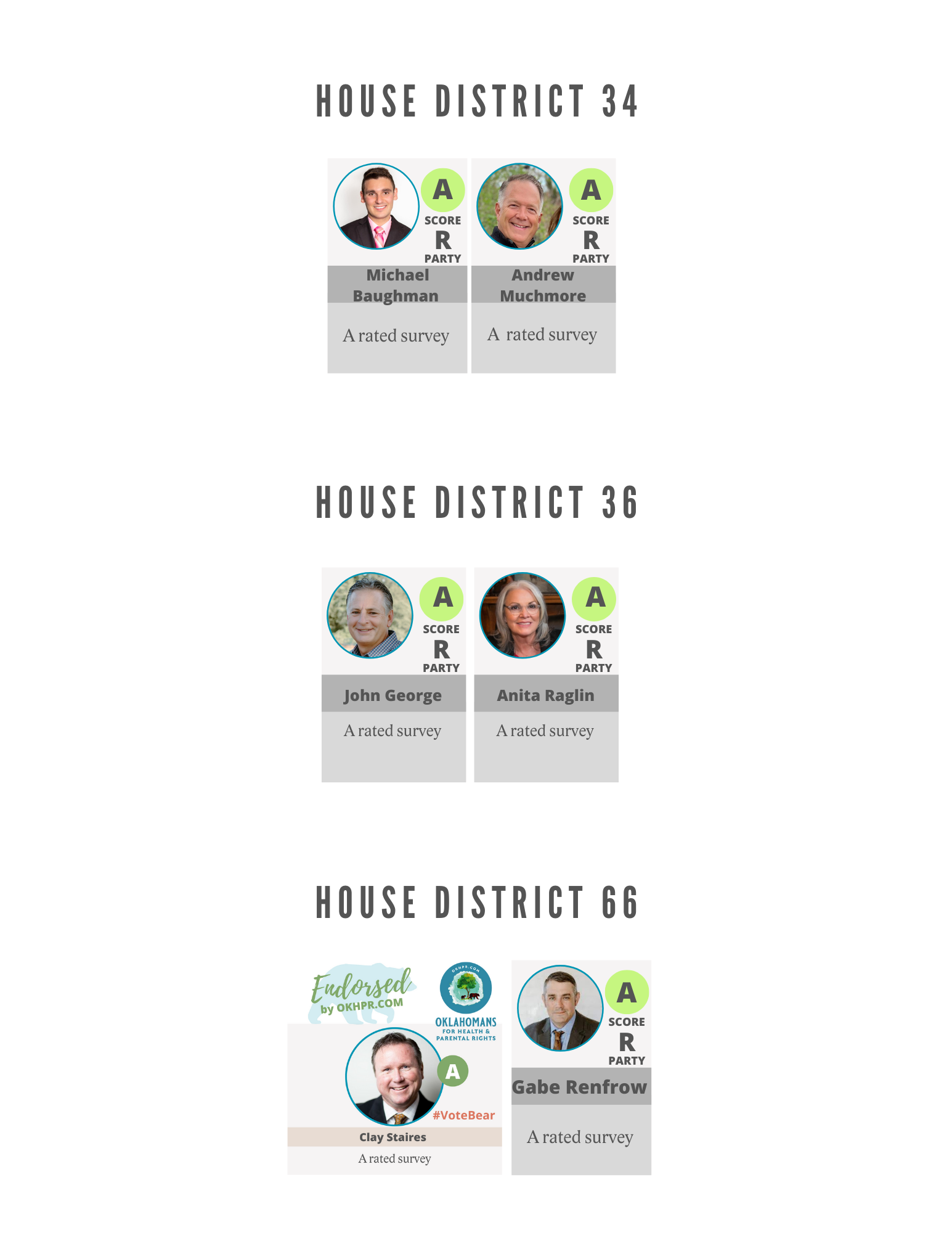 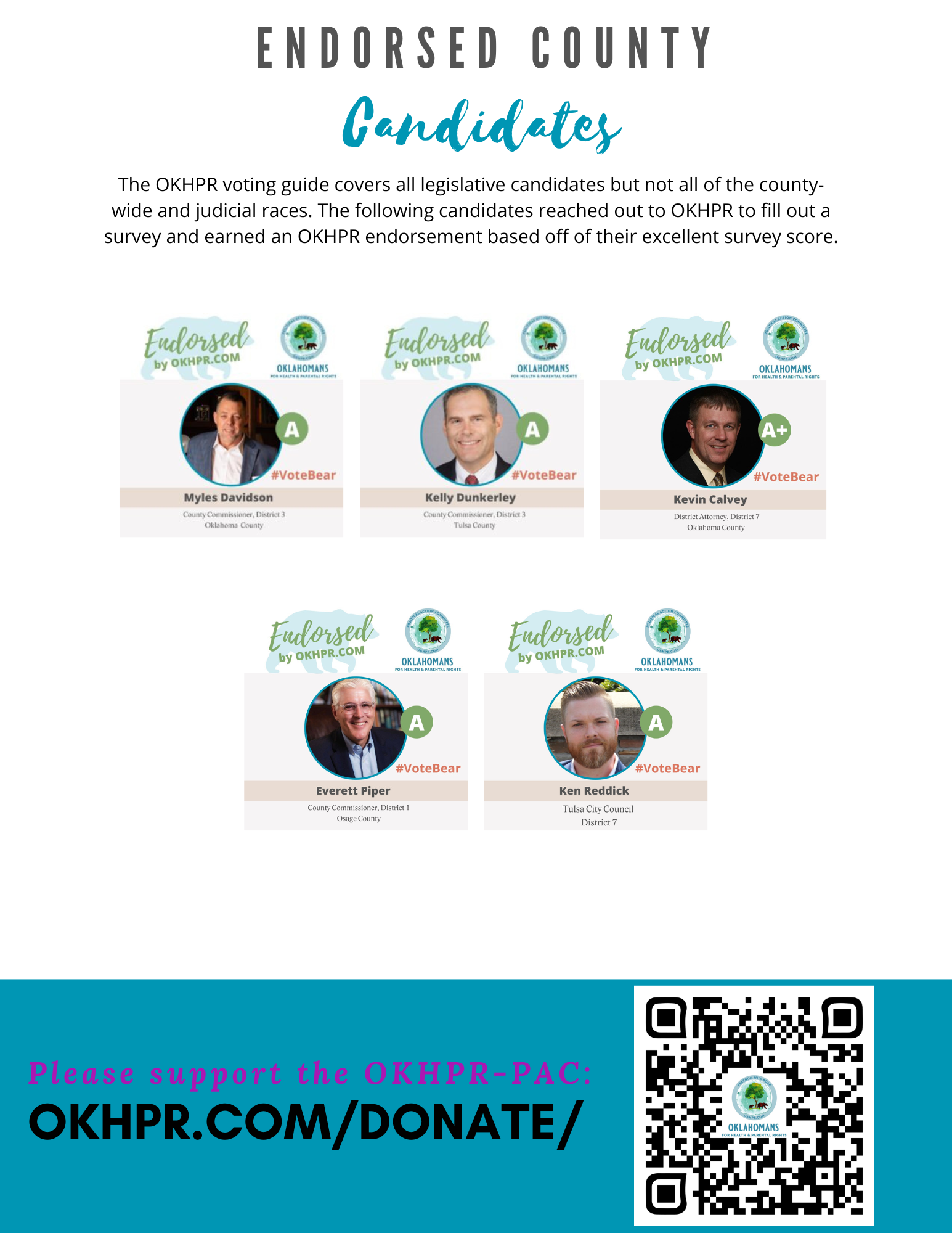 U.S. Senate Race (all Republicans get to vote)
Your pick! NEITHER RETURNED A SURVEY, therefore we CANNOT endorse.

Mullin at the time of our meeting in early May was polling high and was not too concerned with surveys. In early June, I had a brief discussion with Shannon who said he had no incentive to fill out the survey since we had already endorsed Nathan Dahm. This is your pick, the winner will face F-rated Kendra Horn in November. We expect to offer an endorsement in November.

Congressional Race 2 – (Eastern Oklahoma gets to vote)
We have endorsed Josh Breecheen for the following reasons. First, he has a proven record of being a champion of freedom as a former state senator. Secondly, Avery Frix had a B+ overall rating so we could not endorse. Both scored A on surveys but Breecheen had a higher score in his voting and history of fighting for parents and causes related to individual liberty. We appreciate that both candidates took the time to take the survey and appeal for our endorsement, but we feel Breecheen is the stronger candidate here.

State Treasurer – (All registered Republicans get to vote) |
We have endorsed Todd Russ as a proven champion for freedom and limited government and he also returned an A survey. His opponent, Clark Jolly did not return a survey and as a legislator he was not known for being a freedom fighter.

State Superintendent (All registered Republicans get to vote)
There is no question that Ryan Walters is the strongest parental rights and school reform candidate here. He has a proven record of fighting for parents, showing up, and dealing with issues head on. His opponent, April Grace, will be a Joy Hoffmeister 2.0 which has been a disaster for parental rights and education. In addition, Grace has very questionable history of staffing the basketball coach, Ron Arthur, who allegedly was sexually grooming members of his team for years. He should have been fired immediately and we have no tolerance for these types of alleged actions that put children and families in direct harm.

State Labor Commissioner (All registered Republicans get to vote)
There is no question that Sean Roberts is the strongest limited government and freedom fighting candidate here. His opponent, Leslie Osburn is backed by individuals and groups that despise what we stand for.

Corporation Commissioner – Your pick! (All registered Republicans get to vote)

Senate District 2 – Both candidates turned in A rated surveys but Ally Siefried was endorsed in the June 28 primary and we did not receive a survey from Jarrin Jackson until the runoff. We feel pretty confident as far as health and parental rights, both candidates look to be good choices.

Senate District 4 – Both candidates turned in A rated survey and like SD 2, only one of these two turned in the survey in the primary. We originally endorsed another candidate who did NOT make it to the runoff. Keith Barenburg was quick to turn in a survey and got the endorsement next. Like SD 2, as far as health and parental rights, both candidates look to be good choices.

Senate District 26 – This is the only Oklahoma Senate runoff featuring an incumbent. Darcy Jech has done NOTHING spectacular to defend health and parental rights and DID NOT turn in a survey. He stood by while his constituents lost their jobs during the mandates and his opponent, A survey rated Brady Butler deserves the opportunity to defend your God-given rights. Vote Brady Butler!

Senate District 28 – Both candidates turned in A surveys. Jeff McCommas had a stronger survey and many of our long time and active members requested that we endorse him since he appears to be an underdog in this race and is ALSO against the spreading of humanmanure which is a big issue in this farming district. It is because of this that he endorsed over his opponent who has yet to take a formal stance on it. Many of our members who are farmers or are immune compromised are very concerned about the potential health risks of the runoff of humanmanure onto their properties.

House Districts are pretty self explanatory. We can only endorse if we have a survey and it is graded as an A. In the case where both candidates scored an A, we went neutral where we could not see a significant contrast, but there are a handful of State House races that we felt the endorsed candidate was stronger as it relates to health and parental rights or they were more viable to defeat an F-rated candidate in November.

Use the OK Voter Portal to view your sample ballots for the June 28th primary election.

Candidates are required to submit records of their campaign funding. You can check out your candidate’s funding here.

We ask candidates 23 questions on a variety of health choice topics, the survey questions can be viewed here.