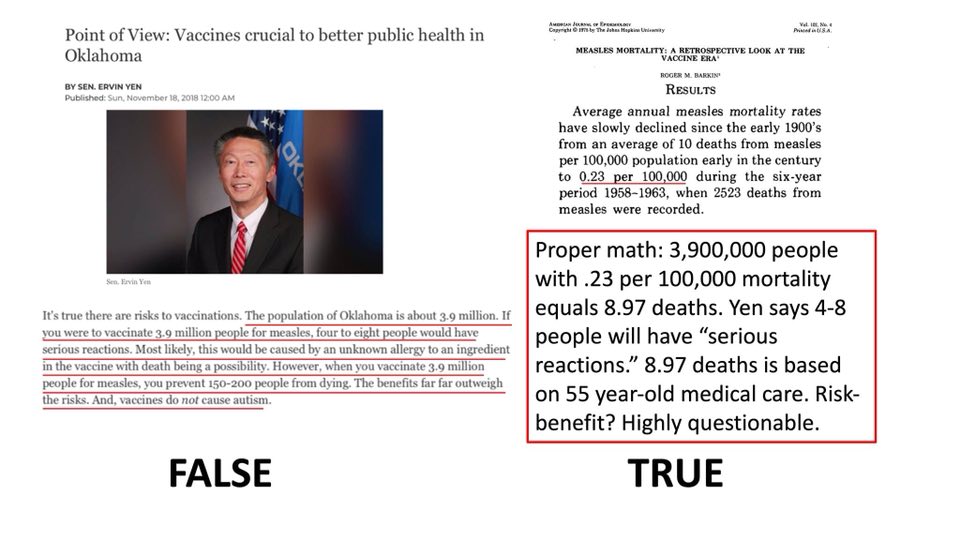 Did you catch The Oklahomans Sunday Op-Ed article written by former Senator Yen? Papa bear JB Handley read it and he wrote a really good rebuttal!

Do the benefits of the vaccine outweighs the risks?

“Vaccine pushers like former Oklahoma State Senator Ervin Yen drive me nuts. The choice for whether or not society should use any one vaccine really does come down to a simple question: Do the benefits of the vaccine outweighs the risks? Of course, my strong contention is that the RISK side of vaccines is dramatically under-stated, and that in fact vaccine makers know this and work hard to obscure the scale of injury their product is causing.

In an Op-Ed published today in Oklahoma, Senator Yen butchers many easily verifiable facts, but none more so than his understanding of measles mortality in the United States. Dr. Yen writes:

“It’s true there are risks to vaccinations. The population of Oklahoma is about 3.9 million. If you were to vaccinate 3.9 million people for measles, four to eight people would have serious reactions. Most likely, this would be caused by an unknown allergy to an ingredient in the vaccine with death being a possibility. However, when you vaccinate 3.9 million people for measles, you prevent 150-200 people from dying. The benefits far far outweigh the risks. And, vaccines do not cause autism.”

What Dr. Yen writes is easily verifiable, and here’s the published study that reveals this.
MEASLES MORTALITY: A RETROSPECTIVE LOOK AT THE VACCINE ERA

These DETAILS MATTER. As Senator Yen himself says, measles vaccine would cause “serious reactions” in 4-9 people, according to him. And that’s to prevent 8.97 deaths? Moreover, that mortality number is 55 years old! Guess what, we have better medical care today and know that Vitamin A therapy, and many other things, can make measles a very mild experience. Today’s death rate, 55 years later, would likely be EVEN LOWER than the number we do have, 0.23 per 100,000. Either way, Yen’s argument is completely destroyed by how similar the mortality and serious reaction numbers really are…

Physicians for Informed Consent, who have a much better grasp of measles data, both present day and historically, than Senator Yen, have a much different perspective on the risk-benefit of the vaccine, writing:
​
It has not been proven that the MMR vaccine is safer than measles. The vaccine package insert raises questions about safety testing for cancer, genetic mutations, and impaired fertility. Although VAERS tracks some adverse events, it is too inaccurate to measure against the risk of measles. Clinical trials do not have the ability to detect less common adverse reactions, and epidemiological studies are limited by the effects of chance and possible confounders. Safety studies of the MMR vaccine are particularly lacking in statistical power. A review of more than 60 MMR vaccine studies conducted for the Cochrane Library states, “The design and reporting of safety outcomes in MMR vaccine studies, both pre- and post-marketing, are largely inadequate.”12 Because permanent sequalae (aftereffects) from measles, especially in individuals with normal levels of vitamin A, are so rare,3 the level of accuracy of the research studies available is insufficient to prove that the vaccine causes less death or permanent injury than measles.

Don’t you think Senator Yen should issue a retraction or correction? Shouldn’t we hold medical doctors who choose to speak publicly to a standard of having their facts right?”