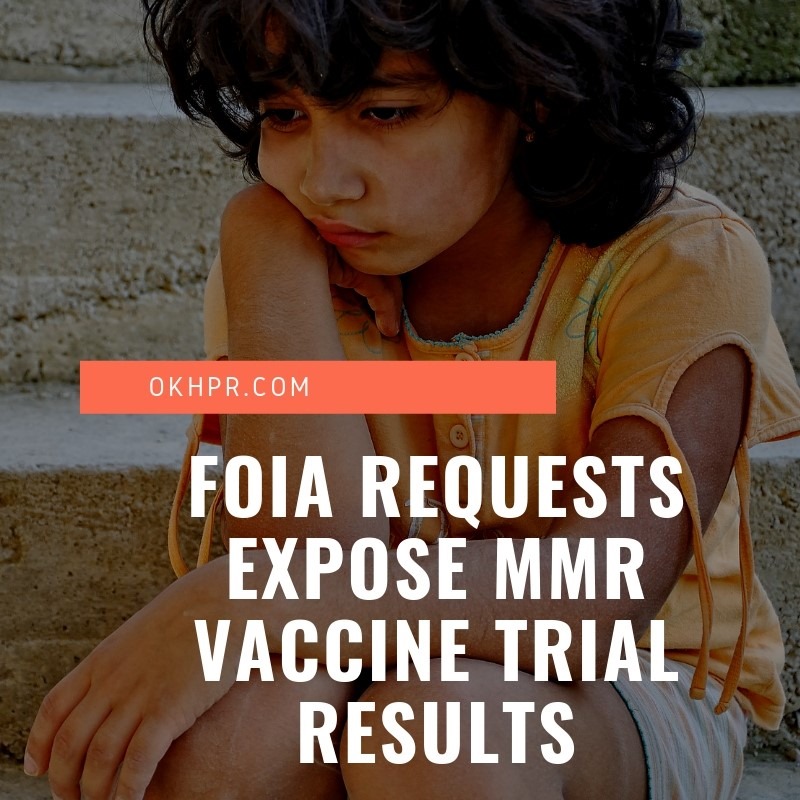 Today, the Oklahoma State Department of Health confirmed Oklahoma’s first measles case of 2019. A middle-aged man who traveled abroad was the first case. Vaccine status is likely vaccinated though that has not been confirmed.

In another significant legal win for vaccine risk awareness non-profit Informed Consent Action Network (ICAN), a new Freedom of Information Act disclosure from the Federal Food and Drug Administration (FDA) has revealed that the MMR vaccine was licensed based on clinical trials which in total had less than 1,000 participants and far more adverse reactions than previously acknowledged.

“It’s alarming that an appeal was required to get this information, but it’s more alarming that every time ICAN prevails in obtaining an FOIA disclosure from the FDA, CDC or HHS, we learn about another serious shortcoming in their duties to assure Americans’ health and health care,” says Del Bigtree, ICAN founder.

The MMR vaccine is at the heart of the vaccine debate. The following are some of the key facts learned from the clinical trial reports produced by the FDA, which the agency relied upon to license the MMR:

“Thanks to the laws in this country that for now at least permit access to various government records, we now know the MMR vaccine was licensed using an irresponsibly small and limited group of children,” says Bigtree.

“But what’s even more alarming is learning about the serious adverse events that were known and acknowledged, yet ignored in order to license the MMR vaccine,” Bigtree adds, noting “This was after only tracking adverse events for 42 days after injection – imagine what they might have found had they tracked safety for three years against an appropriate control, like they do for drugs.”

In 1986, the National Childhood Vaccine Injury Act shifted legal liability for vaccine injuries to the U.S. Government which has since paid over $4 billion for severe injuries or death. With this new-found lack of accountability to both pharmaceuticals and doctors, we saw the vaccine schedule increase dramatically. Congress charged Health and Human Services (HHS) with the primary responsibility of ensuring vaccine safety on this tripled schedule. HHS was required to create a task force and submit bi-annual reports to Congress detailing actions taken to ensure vaccine safety. This stipulated order shows that HHS has not acted in its duties.

Additionally, there is NO single measles vaccine available in the U.S. Only the Measles, Mumps, and Rubella vaccine is available. Many parents prefer to space out vaccines and this is not an option for Americans. Many nations, including Japan, have banned the MMR. Dr. Nakatani, Director of the Infectious Disease Division at Japan’s Ministry of Health and Welfare said that giving individual vaccines cost twice as much as MMR ‘but we believe it is worth it’. What does Japan know that we do not?

The MMR vaccine currently in use was licensed based on clinical trials in which children experienced far more adverse reactions than previously acknowledged.